So after the recent election and the way this country, and my heart, were so divided, I took a long, hard look at the root of my discontent and I came up with two basic truths.

First, when asked to search our souls and arrive at a decision that is of a political nature, I believe we have fallen far short. Make no mistake, I firmly believe your faith should guide EVERY decision you make in life, including those of a political nature! You may try to separate your politics from your faith as best as possible, but you will fail miserably, for you cannot claim faith and trust in God and not allow Him to permeate all areas of your life. Why would a God who desires your WHOLE heart wish to be left out of certain aspects of your life? So my first truth is this: as Christians, I believe we too often attempt to interpret Christ through the world's eyes rather than interpreting the world through Christ's eyes. Case in point: when facing a tough decision, we are implored to consider, "What would Jesus do?" We consistently try to make sense of challenges and opposition by trying to understand Christ. But the truth is, Christ is not that difficult to figure out. He loves you, He wants what is best for you, He was clear about what He detested, and He asked you to take a stand on the side of purity and grace. When something seems confusing to me, it does not do me much good to look through my worldview glasses for truth and clarity, but rather to read the Word, ask God for guidance and consider the following. It isn't really about what Jesus WOULD do. It's about what Jesus DID do. And it's all right there in God's own words. He didn't leave some stuff out for us to second guess Him. He let His wishes be known.

And that brings me to my second truth. I don't believe this world is hurting because we have had a Republican in the White House for too long and I don't believe we will sink deeper into despair because we will now have a Democrat in the White House. I believe this world is hurting because we have left Jesus out of OUR homes for too long. I feel like He's been knocking on our doors, especially mine, for quite some time and maybe my music's been up too loud or something, but I certainly haven't heeded the call! Now, I'm not one of those people who chooses to guess the time when my loving savior will come to call me home (assuming I'm so lucky) or try to label how far into the end times we have traveled, but I do know this. We are called to always be ready and that means NOW! Notice I stated earlier that I believe Jesus wants us to take a stand on the side of purity and grace. I think grace is the bigger part of that equation. When we let Jesus direct our steps, He does so not with a heavy hand, iron fist, or angry voice so much as He does so with grace and we are to do the same. Somehow, some time ago, Christians became known as self-righteous hypocrites and I'm not so sure we didn't somehow earn that title. The truth is, if we are claiming to live without sin simply because Christ has found us, we truly are hypocrites. If, however, we are claiming to follow Christ in hopes that we will SOMEDAY live in the absence of sin, and treating others with the same measure of grace, we are spot on! People, we follow no man further than he follows Christ. I don't do as other Christians do (except for the whole sinning thing). I do-or try to do-as Christ did. 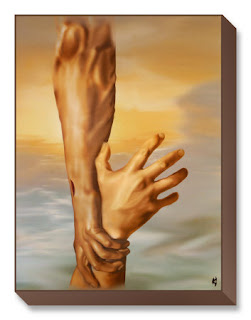 Philip Yancey begs the question, "What's so amazing about grace?" and I loooove His work. So what is so amazing? Well, let's see, what's not??? Grace is unwarranted, grace is not fair, and grace is so beautiful. When we sin, we are not fallen Christians, because as Yancey states, "The opposite of sin is grace, not virtue." We are simply Christians, saved by grace. How can we not approach a fallen world with the same measure of grace that is extended to us daily by a loving God? Yancey also states, "The sense of sin is the measure of the soul's awareness of God." Essentially, you cannot know God without knowing that you are a sinner. Hallelujah people! I'm not giving you a free pass to sin so that you can get to know God a little better. I'm just saying, remember the golden rule. Come on now, search waaaay back to kindergarten when you were firts taught to do unto others as you would have done to you. When did that stop being applicable, huh? If God loves us in our failures, how can we not love others in theirs. And now, I'm gonna hit ya with the tough stuff and I'll say it as simply as I can. You gotta repent! God has no place for a sinner who refuses to repent. And that's it. Love those little backsliders as much as possible (including yourselves - a little forgiveness for ourselves goes a long way), show them what a penitent heart looks like, and maybe they'll catch a glimpse of God in there somewhere!
Posted by frvrchanged at 3:46 PM

Good Post Jules- I too respect the writings of Philip Yancey- he has some good stuff.

Thanks for your blog address, Julie C! I totally agree with what you said about all of us being sinners saved by grace. "If we claim to be without sin, we deceive ourselves and the truth is not in us." -1 John 1:8. But I also think that what you said about not continuing to live in sin so that we could "get closer with God" (isn't that how you put it?)is equally as true. "What shall we say, then? Shall we go on sinning so that grace may increase? By no means! We died to sin; how can we live in it any longer?" -Romans 6:1-2 Christ came to set us free from our vices; not to feed them! Even though sanctification is an on going process to increase in Christ-likeness that will NEVER be completed on this side of heaven, we are set free from sin's reign over our lives RIGHT NOW and we no longer have to live in the wallowing of our own sinfullness. "If we confess our sins, he is faithful and just and will forgive us our sins and purify us us from all unrighteousness." -1 John 1:9 When we wallow in our own sinfulnness, we are basically telling God that we don't believe that the power of His death and resurrection was enough to completely cover our sin and that His grace isn't enough to change our desire to sin into a desire for righteousness. But the Bible tells us that once we confess Christ as savior, God no longer sees our sin when He looks at us. He sees us as pure and holy... NOT because of anything that we did but because of what HE did on our behalf. "But God demonstrates his own love for us in this: While we were still sinners, Christ died for us." -Romans 5:8 I guess what I'm trying to say is that I agree with you in that we ought to be extending grace to one another as well as to ourselves, NOT because we are hopeless sinners who can never reach Christ-likeness, but because we are now marked by grace, and not by sin! "For sin shall not be your master, because you are not under law, but under grace." Romans 6:14 What freedom there is in seeing ourselves the way Christ sees us! What hope for a better tomorrow! So, to agree with your main point, let us DEFINITELY extend an abundance of grace to ourselves and each other NOT because we are all no good sinners, but because we are humble and grateful for all Christ has done for us and hopefull for all He can make us to be!

Born to be Mrs. Beever said...

Oh my...I love one simple phrase in your comment:

Christ came to set us free from our vices; not to feed them!

I will remember that forever! - Stacey

Born to be Mrs. Beever said...
This comment has been removed by a blog administrator.
9:10 AM